We are pleased to announce the final schedule for NAM2014. It is available in PDF format by clicking the image below. 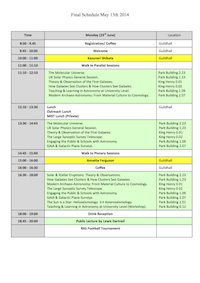 Our Parallel Sessions page has been updated with a list of all the individual talks for those sessions, along with the posters that will be on display during the meeting.

Payment and registration is open here.

Due to popular demand, we have extended the deadline for abstract submission for NAM2014 until April 11th 2014 (23:59pm). We have received over 430 submissions so far, but many still want to come and contribute to our scientific programme. Registration for the conference is open until May 30th 2014 with several optional events allocated on a “first come, first served” basis.

A brief reminder that it’s a week to go until the abstract deadline for NAM2014. Please submit your abstracts for posters, contributed talks and invited talks by MIDNIGHT (UK time) on April 1st 2014. Please send enquiries to info@nam2014.org.

We are pleased to announce the opening of registration and the payment system for the 2014 Royal Astronomical Society (RAS) National Astronomy Meeting (NAM) in Portsmouth during June 23rd-26th. Please click here and follow the instructions for registering and paying for the conference, including booking university accommodation, social events and the registration fee. Please have your RAS membership number available as we do provide special rates for RAS members.

Registration and payment will close on 30th May 2014 as we must confirm delegate numbers to our university accommodation and catering. Many of our social events have limited capacity, which will be allocated on a “first come, first served” basis, especially the banquet on-board HMS Warrior and the “Science Comedy Supernova” event. Please book now to avoid disappointment. Moreover, we have limited university accommodation which includes our seaside-located Rees Hall (with a fantastic breakfast): We offer “early-bird” packages that provide a discount for simultaneously booking both the accommodation and registration fee for whole conference.

Please be careful when making your booking as any errors and refunds can only be corrected by the University of Portsmouth Finance Office and not the NAM2014 staff. We cannot provide refunds after 30th May 2014 as final numbers will have been confirmed to suppliers. Registration after 30th May 2014 will be subject to availability and any late-comers should contact info@nam2014.org

We also remind everyone about our abstract submission deadline of 1st April 2014, which is fast approaching. Please be aware that the present schedule of parallel sessions given on the NAM2014 webpage is still preliminary and we have had a few requests for changes to the time and dates of some sessions. We endeavour to keep the schedule online as up-to-date as possible, and will publish a final schedule as soon as possible after the abstract deadline to help people plan their trips to Portsmouth.

We look forward to welcoming you to our great waterfront city. See you soon.

We are pleased to announce that abstract submission for the parallel sessions is now open. Our parallels page has also been updated with more details on the topics of these sessions.

You can also use the abstract submission form to let us know which parallels, special lunches and other events you are interested in to assist with our preparations, even if you are not choosing to submit an abstract for a talk or poster.

Please note this is not formal registration, which will open in the future alongside our payment system, and travel should not be booked based on the schedule at this stage. Please also note that abstract submissions for the UK Cosmology sessions should be made directly to Antonio Padilla rather than via the webform.

On behalf of the Scientific Organising Committee (SOC) of the RAS National Astronomy Meeting (NAM) 2014.

NAM2014 will be held in Portsmouth 23-26 June 2014 and will incorporate both the UK Solar Physics (UKSP) and Magnetosphere, Ionosphere and Solar-Terrestrial (MIST) meetings.

The NAM2014 programme will include 8 plenary lectures and two public lectures covering a range of topics including cosmology and extragalactic astrophysics, numerical modelling, solar physics, planetary science, and the current and future space missions and ground-based facilities. NAM2014 will also feature the Prize Lecture by Ken Freeman.

The NAM2014 programme will include slots for several dozen parallel sessions, of adjustable duration and format, with further sessions in the programme dedicated for poster viewing.

On behalf of the NAM2014 SOC we would like to invite from the community nominations for parallel session themes for the 2014 meeting. Nominations are welcomed for any topic of research area considered relevant to the NAM. Particularly welcomed are nominations likely to have broad cross-community appeal.

At this stage nominees for parallel sessions are requested to submit to the SOC the following information by e-mail :

2. Brief (i.e. a few sentences) rationale for its nomination

3. Name(s) and e-mail address(es) of the session organiser(s)

4. Proposed duration (how many 1.5-hour blocks?) and justification.

5. Size of the anticipated audience

The SOC will be pleased to consider nominations for multiple parallel sessions, i.e., 2 or more sessions with a linked theme that could run across several days of the NAM programme. The SOC also particularly welcomes nominations for themes that are regarded as timely, e.g. relating to current or upcoming missions.

The NAM 2014 SOC will meet shortly thereafter to review the nominations received. It is expected that the final programme of parallel sessions will be announced before the end of Feb 2014.

The NAM2014 programme will include 8 plenary lectures and two public lectures covering a range of topics including cosmology and extragalactic astrophysics, numerical modelling, solar physics, planetary science, and the current and future space missions and ground-based facilities. NAM2014 will also feature the Prize Lecture by Ken Freeman. The full list of confirmed plenary speakers includes: